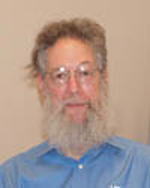 Protein biophysics- We study protein folding and the intermolecular interactions between protein subunits of multimolecular complexes, between proteins and small ligands, and between cations and DNA. Particular emphasis is placed on the role(s) of water of hydration. Among the properties of hydrating solvent that differ from those of bulk water is the density. Changes in density manifest as changes in volume, which we measure, along with a variety of spectroscopic and other properties. Both equilibrium and kinetic data are obtained, often from the same experiments. In the refolding of ribonuclease-A, for example, two slow processes are seen which occur concurrently with different time constants and different kinetic responses to altered solution conditions. One entails a rise in volume, while the other yields a fall. Their molecular bases have been tentatively identified. In a collaborative project we have fused a leader sequence to a globular protein which is not normal secreted from the cell. The fusion product folds to the native conformation, but its folding is retarded by the presence of the leader, with implications for the control both of secretion and for folding in vivo. Lastly, in theoretical work we have developed methods for the analysis of protein secondary and tertiary structures that will aid in protein design and have implications for folding. This last project is computational and makes heavy use of graphics.

Toxicology and environmental science of dioxins and related compounds- In a collaborative project we have developed methods to evaluate past exposure of people to dioxins and related compounds. Studies of Vietnam veterans exposed to Agent Orange during the war have been completed. We have also studied environmental exposure of marine animals which feed on contaminated sediments, the materials through the food chain. Laboratory studies have focused on purification and identification of proteins that bind dioxin. For this purpose we have developed an affinity purification column to which dioxin is covalently attached. An understanding of which proteins may be involved in dioxin binding will help us understand the broad and somewhat nonspecific manifestations of the toxicity caused by these compounds.